Diagnosed in 1991, David Dillon was sure his HIV-positive test was a death sentence. He’d watched friends die, struggling on the only drugs available at the time, medications that had intense side effects and were barely effective, with the rapidly evolving AIDS virus building resistance to them often within months.

But then the words of a social worker resonated in his mind. Experts, she had told him soon after hearing his diagnosis, were on the verge of turning the once always-deadly affliction into a chronic but manageable disease. “That’s what I grabbed on to right away,” Dillon said. “And that’s what I’ve hung on to ever since.”

Dillon was one of the first HIV-positive patients to volunteer for studies with the AIDS Clinical Trials Unit (ACTU) at the now University of Colorado Anschutz Medical Campus. Today, as the ACTU celebrates 25 years of major contributions in revolutionizing HIV/AIDS treatment, Dillon is still alive, grateful for CU and content knowing he helped make a difference.

The human-immunodeficiency virus (HIV), which spread fear and bias throughout the country in the ‘80s, killing people from actor Rock Hudson to writer Isaac Asimov, had no treatment until 1987, and no effective drugs until the mid-‘90s. CU eventually became one of the top research universities for HIV/AIDS research in the world, but not until netting a major new faculty recruitment. 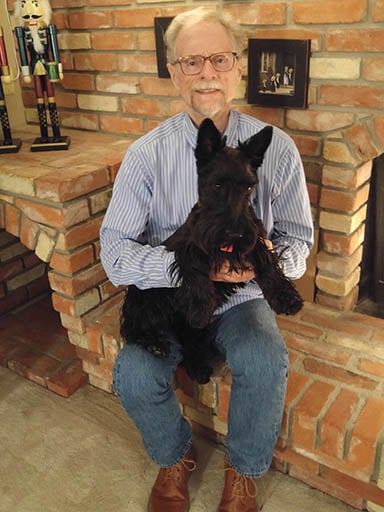 David Dillon has set a goal of outliving his new pup, Finn.

“I remember sitting on my back porch and reading about his recruitment on the front page of The Denver Post,” said Campbell, who was an infectious disease fellow at the time. “Bringing him to Colorado was like recruiting John Elway to the Denver Broncos. It’s bringing a superstar to Colorado, which helps elevate the whole team.”

By 1991, when Dillon, a Housing Department employee at CU Boulder at the time, was learning of his infection, the National Institutes of Health was tapping Schooley to lead a new ACTU, injecting $4.8 million in adult AIDS research and $3 million in pediatric AIDS research into CU’s coffers. CU’s unit joined a growing number of national sites within the AIDS Clinical Trials Group (ACTG), formed in 1986 as the urgency for new drugs intensified.

“Schooley was the key person that made that happen, and so all of the great HIV/AIDS research capacity that we have today is largely possible because of the groundwork that he laid and the foundation that he built in the early ‘90s,” said Campbell, who had joined CU as an infectious disease fellow that year and is now medical director of the adult Clinical and Translational Research Center (CTRC) of the Colorado Clinical Translational Science Institute at CU, where clinical trials are conducted.

For many Colorado HIV patients, including Dillon, the move was a life-saving boon.

Road past resistance is long

Wearing a beeper, which interrupted him every four hours to take his arsenal of pills, Dillon, now 65, was one of the lucky ones in that the regimen’s side effects didn’t make him so sick he ditched the AZT (azidothymidine), choosing to accept HIV’s fate. But he knew the drug’s effects were waning.

'It seemed like I was already at the cusp, so when a drug came into testing, I was ready for it. Dr. Steven Johnson saved my life more than once.' – patient David Dillon

Dillon found Graham Ray, RN, still a study coordinator with CU’s ACTU, and signed up for one of the first of what would exceed 177 clinical trials in the unit’s 25 years, with more than 2,500 participants coming forward to help scientists in their search for a more effective treatment.

The study involved spending some nights in the hospital, and Dillon recalled a trial patient in a nearby bed. “He had pretty much run the gamut of drugs available. He’d run out of options, so this trial was one of his last hopes,” Dillon said. “I lost several friends that were in the same boat. There just wasn’t new treatment coming fast enough to help them.”

Few drugs and rapid resistance were major problems for patients in those days,” Campbell said. “We could only give one or two drugs at the most together, and drug resistance developed very rapidly. The medicines lost their effectiveness.”

For Dillon, who estimates he tried upwards of 20 single experimental drugs, the trials always came right in time, with Ray and his CU doctor, Steven Johnson, MD, of the Division of Infectious Diseases, regularly alerting him to new studies.

“It just seemed like I was already right at the cusp, so when a drug came into testing, I was ready for it," said Dillon, who still travels to CU Anschutz from his Loveland home, indebted to his caregivers. “Dr. Johnson saved my life more than once,” said Dillon, who has AIDS, the end-stage disease of an HIV infection.

HIV attacks patients’ immune systems by binding to and killing CD4 cells, which are largely responsible for fighting infections. Doctors monitor CD4-cell counts, assessing the progression of the disease. If a patient’s count falls below 200, then they are diagnosed with AIDS, and their risk of deadly infections rises. Dillon’s counts were once as low as five. 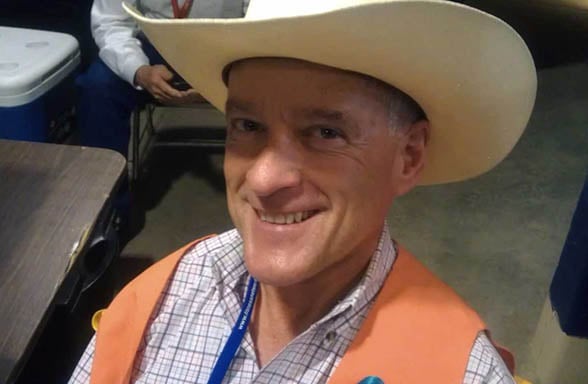 Patrick Terry has been an integral member of the International Gay Rodeo Association for 30 years.

For Patrick Terry, a former Colorado rodeo staple and Denver-area native, who has done “probably a dozen” trials with CU since 2000, taking part in trials is about staving off AIDS (his CD4 count has never fallen below 500), and putting an end to the epidemic. “To me, it’s so important that we find out more about it, and if there’s any chance that there could be a cure, then I’d like to be a part of it.”

Helping science isn’t always easy, said Dillon and Terry, 60, who calls himself a go-to volunteer for ACTU research nurse Cathi Basler, RN, because of his dedication to the trial process. Although he said he’s “lucky” to have apparently always received the active drug in the double-blind studies, Dillon recalled a nearly five-year trial that required injecting a drug in his abdominal muscles twice a day.  “It just hurt, and you had to just keep doing it.”

“You know when you are on the real drug,” said Terry, who has volunteered for clinical trials with Basler for years after being diagnosed with HIV in 1995. “I’ve had some very difficult studies,” he said, noting one in which the drug was so strong, it caused hallucinations, and another in which he had to have lymph nodes removed.

But the pair’s dedication has paid off, for them, and for many of the more than 30 million people worldwide living with HIV.

Treatment only works with adherence

In 1996, a CU ACTU-led research study played a key role in the development and widespread use of what was commonly termed “drug cocktails.” That was a major turning point in HIV/AIDS treatment, Campbell said.

“When we first really had the ability to put three drugs together to make an effective combination, it greatly reduced the risk of drug resistance. It did so by having much more effective suppression of viral replication,” he said. “We suddenly had a way to effectively treat HIV and prevent all the damage it does to the body.”

David Dillon, one of the first HIV-positive patients to volunteer for studies with the AIDS Clinical Trials Unit, is indebted to his caregivers at the CU Anschutz Medical Campus. He still travels regularly to CU Anschutz from his home in Loveland.

But Terry, emphasizing that the effective drugs are still not a cure, advocates for medication adherence. “I’ve never missed a dose, and that’s probably one of the most important things,” said Terry, , who watched his “little brother” die in 2005, after living in denial with an HIV infection for years and succumbing to AIDS within 18 days of hospitalization.

“Take it seriously,” Terry said. “Don’t skip your medicine. That’s a problem with so many people. The medicine doesn’t work if you don’t take it. And take care of yourself,” he said, adding that he stopped drinking at diagnosis and keeps an eye on fitness.

While noting the great scientific achievements, which would not have been possible without dedicated volunteers, Campbell, too, emphasized that HIV remains a serious virus with no cure. “Yes, a person diagnosed today who seeks treatment early and adheres to it should live a near-normal lifespan,” Campbell said. “But near normal is not normal. There’s still a lot of work that needs to be done.”

The to-do list for HIV/AIDS researchers remains long, with vaccine trials still underway, and development of a cure feasible but probably not within close reach, Campbell said. Continuing efforts to treat HIV patients in developing countries remains a priority, as does boosting prevention education.

For instance, use of an antiretroviral drug combination called PrEP in high-risk individuals who are not yet infected can reduce their chances of contracting HIV, and early treatment in patients already infected can not only boost their chances of success; it reduces the virus’s spread, Campbell said. “So we not only help them, but we help the rest of the community.”

Dillon said he’s grateful for that first social worker’s hopeful words and for finding the ACTU at CU at the right time. “It saved my life, and it saved a lot of other lives.”