From throwing a hammer in Bird’s Nest Stadium in the 2008 Summer Olympics to studying to become a surgeon at CU Anschutz, former Olympian Loree Thornton is no stranger to pushing herself to the limits in pursuit of her dreams.

Since watching the 1996 Summer Olympics, Thornton knew that when she grew up she was going to be an Olympian. She didn’t know what her sport would be, but she envisioned competing in the games and meeting her teenage crush – a Russian gymnast. She went so far as to take four years of Russian in high school.

“I was like, ‘I need to speak Russian so I can meet him,’” Thornton shares with a laugh in an interview, “because, you know, I’d meet him and get married.”

She didn’t learn what her event would be until she was an undergraduate in college. One day, her track-and-field coach suggested she try the hammer throw.

“I was like, ‘Cool what’s that?’” The hammer isn’t a typical tool, but rather a metal ball weighing about nine pounds. Attached to a steel wire, the ball gets swung above the head and released to fly across the field.

“I think it picked me,” she says of the sport she adores.

From then on, Thornton worked toward her goal of reaching the Olympics. At Colorado State University, she trained about four hours a day with her coach, going on to set a hammer-throw record.

“I broke the collegiate record – the furthest-throwing female to throw a hammer of all time,” says Thornton. “That’s why I think it chose me; I loved it.” 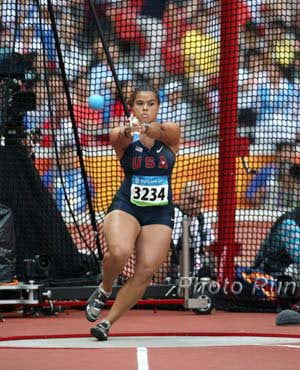 Loree Thornton competes for the U.S. in the hammer throw.

In 2008, her dreams became a reality. She earned one of the three spots on the U.S. hammer throwing team for the Summer Olympics in Beijing. She admits that walking into Bird’s Nest Stadium was one of the most surreal experiences of her life. She had given over 10 years in pursuit a dream.

“You question yourself, you question the process, and then to walk into a stadium that’s vibrating with energy wearing USA across your chest,” she says. “It was one of the best feelings; I cried when I walked out. I thought, ‘all that work for this moment.’ It was pretty exciting.”

Even though Thornton participated in the Summer games, she is connected to the Winter Olympics. Some of her former track teammates went on to participate in bobsledding, and a former roommate from her first year of medical school is a gold-medalist speed skater.

“I love figure skating. It’s really cool to see all those years of hard work come out so beautiful,” she says. “It’s where sport meets art.”

After the 2008 Olympics and four more years of throwing hammers, Thornton retired from competition in 2012 to chase another dream: to become a surgeon. Being a doctor had always been on her mind, but she had doubted her abilities – even after going to the Olympics.

'Some weeks I get five hours of sleep a night. It reminds me of why we do what we do. One day someone's going to need the best of us.' – Loree Thornton

“I came from a pretty underprivileged background. Saying you want to be a doctor is on par with saying you want to be an astronaut. People don’t do that, not people like you,” she says. If going to the Olympics taught Thornton anything, it’s that any dream, no matter how seemingly unattainable, can come true with enough hard work and dedication.

Sights on a new goal: surgeon

Thornton applied to medical schools and, upon hearing that she had been accepted to the CU School of Medicine, she cancelled all her other appointments.

Training to become a surgeon isn’t exactly like the long hours in the gym, but she is finding new ways to challenge herself to become the best-possible doctor. Thornton admits that when people suggest the kind of surgeon she should become – orthopedics is an oft-mentioned specialty – she thinks she wants to take a different path to prove them wrong. Whatever surgical route she chooses, Thornton continues to work tirelessly.

“There are some weeks where I get five hours of sleep a night. I’m getting my butt kicked, and I’m tired, but then I go into clinicals and I’ll learn about a disease in class and I’ll see it and feel like I’m helping a patient. That’s my favorite part: it reminds me of why we do what we do,” she says. “One day someone’s going to need the best of us.”

Thornton is currently in her second year of clinicals at CU Anschutz, on track to graduate with the class of 2020. Similar to the way a sport picked her years ago, Thornton believes CU Anschutz likewise came calling.