The new study adds to a growing body of information linking a lack of sleep to a range of ailments including obesity, metabolic syndrome, mood disorders, cognitive impairment and accidents.

“We found that when people get too little sleep it leaves them awake at a time when their body clock is telling them they should be asleep,” said the study’s lead author Kenneth Wright Jr., PhD, professor of integrative physiology at CU-Boulder and also professor of medicine at the University of Colorado School of Medicine. “And when they eat something in the morning, it impairs their ability to regulate their blood sugar levels.”

Wright and co-author Robert Eckel, MD, an endocrinologist and professor of medicine at CU Anschutz, looked at 16 healthy men and women in their study.

Blood tests later showed that those who slept five hours a night had a reduced sensitivity to insulin, which in time could increase the risk of getting diabetes.

“We did a study last year showing weight gain is caused by a lack of sleep and now we find that there could also be a risk of diabetes,” said Eckel, an expert in diabetes, cardiology and atherosclerosis. “While the exact mechanisms are unknown, it’s clear that a lack of sleep causes metabolic stress.” 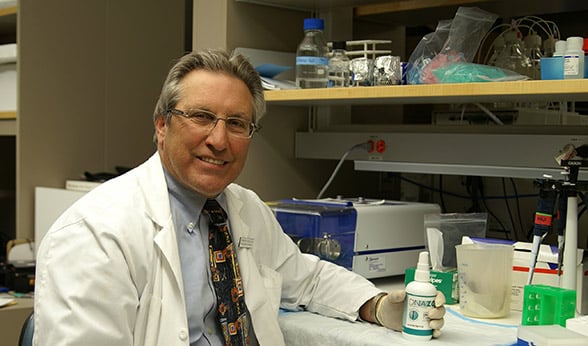 Wright, director of the Sleep and Chronobiology Laboratory, believes the answer could lay in our body clock.

"We have a clock in our brain which controls 24-hour patterns in our physiology and behavior. It also controls the release of the hormone melatonin which signals our body that it’s night time,” Wright said. “High melatonin levels at night tell us to sleep.”

But if a person eats instead of sleeps during this time, it may alter the way the body responds to the food, impairing insulin sensitivity, he said.

“The body has to release more insulin to keep blood sugar levels normal,” Wright said. “Our bodies can adapt initially but over the long term they may not be able to sustain it.”

Diabetes rates are skyrocketing nationwide, said Eckel. By 2050, he noted, as many as 33 percent of all Americans may have Type 2 diabetes.

“In this study we are dealing with healthy individuals,” Eckel said. “I think the next step is to test those at a higher risk of diabetes.”

Both researchers said the study involved a unique level of collaboration.

“Bob is a diabetes expert and I’m a sleep expert and we brought our expertise together here,” Wright said. “This is a great example of collaborative science.”

The study was funded by the National Institutes of Health and the Howard Hughes Medical Institute with the Biological Sciences Initiative/Undergraduate Research Opportunities Program at CU-Boulder. It appears online today in the journal Current Biology.