It was the middle of the night when the plane landed carrying wounded soldiers. Immediately one man was brought to critical care. He had lost his right eye, his right arm, most of his leg length-wise and half of his body was covered in severe burns.

Pearl set out to stabilize the patient, but he was crashing. Doctors were scarce, but Pearl found one working with another patient and apprised him of the situation. He immediately attended the patient. Eight hours later, the patient was stabilized and his life was saved. He was able to walk within a few days.

This has been one of the many events over the course of her career that has caused Pearl to admire military health care. With more than 20 years of service in the United States Air Force (USAF), as well as decades of experience in academia and health care, Pearl has made it her mission at CU Anschutz to grow the knowledge base of military and veteran medicine and nursing and train the next generation of health care providers to heal enlisted servicemen and veterans.

Road to nursing and the military

Pearl entered the USAF in 1992 at age 30 after earning her M.S. in Nursing from Pace University in New York. She had previously earned a B.A. in liberal arts and dance therapy from New York University in 1986, enjoying using movement to identify and alleviate stress and other psychological ailments. However Pearl felt herself being drawn to nursing.

“I had a calling to become a nurse,” Pearl said. “I wanted to have a greater ability to do a lot of different things. Nursing is wonderful that way. You can really move around to the different specialties.”

Pearl began her nursing career working in an array of specialties such as pediatrics and OBGYN. When her first patient passed out under her care, she saw it as an opportunity to grow and decided to become a critical care nurse.

For the next two years she worked in critical care and trauma after receiving her certification as a nurse specialist in critical care. At this time another calling surfaced—a call to serve her country.

“I was brought up in Israel from age 7–12,” Pearl said. “As you’re going to school there, you’re integrated into the military to a certain extent, even from a very early age. Everybody is expected to give service. That idea of service stayed with me.”

To say Mona Pearl’s military career is impressive would be a major understatement. 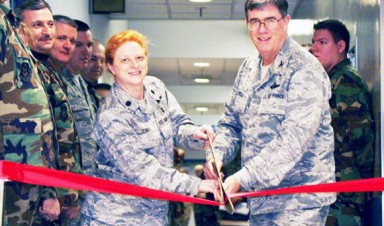 Pearl’s military resume boasts assignments ranging from surgical trauma/transplant nurse and critical care educator to director of the Medical Directorate for the Air Force Reserve and medical advisor to the secretary for the Air Force. She was commander of the 911 Aeromedical Staging Squadron, which saw her responsible for 150 people spanning 25 specialty areas. She had three missions: keeping people in her unit ready to respond should the need arise, overseeing critical care transport teams and contingency air medical staging.

“Being a squadron commander is like being the mayor of a city,” Pearl said. “It was a very busy assignment and truly an honor to be there.”

Pearl was selected to attend National Defense University’s Industrial College of the Armed Forces, where she earned her master’s in national resource strategy. She had previously completed her PhD in public policy and public administration with a focus in international relations and health care at Auburn University in 2003.

These educational opportunities, combined with the increasingly involved assignments, afforded Pearl the opportunity to view the military and its health care systems from a variety of perspectives. 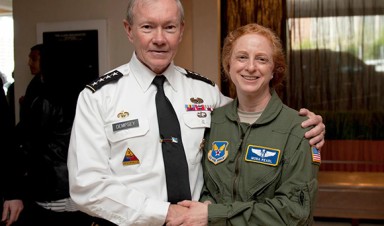 Gen. Martin Dempsey and Col. Mona Pearl, both cancer survivors, share a moment after a 2012 conference about suicide prevention and resiliency for military members. They discussed the difficulties being faced by the military and the hardest battles, from cancer to PTSD.

“I have had cancer three times so I have had the experience of being patient,” Pearl said. “My former husband had PTSD. Experiencing all of this firsthand makes it personal. I’ve been a nurse administrator, policy maker, advisor, educator—I’m blessed to have all of these different perspectives.”

Pearl retired from the military with the rank of Colonel and was honored with the Legion of Merit.

At the College of Nursing

“I had this thought for a long time that military and veteran medicine was its own specialty,” Pearl said. “Before I came out to CU, I spoke with Dean Sarah Thompson, and she had the vision and foresight to invest in this as a program.”

In just one year Pearl has launched the veteran and military health care (VMHC) specialty, aimed at providing caregivers with knowledge on military and veteran health care delivery systems, care during military operations and the visible and invisible impacts of combat and military culture.

“One of the things that makes this such a unique clinical specialty is that soldiers have this service in common and it affects their psyche,” Pearl said. “When you’re trying to treat the whole person you have to have an understanding of that.”

Treating the whole person has been the hallmark of Pearl’s research. PTSD, TBI and increasing suicide rates of soldiers and veterans are major characteristics of the current military conflicts according to Pearl, and treating the physical wounds is simply not enough.

“The things military medicine has done are incredible,” Pearl said. “We have a 98 percent survival rate, and a lot of these people return because we can save them. But they come back broken in more ways than physical wounds because of all of the missions they’ve had to deal with.”

“Our military is supported by families,” Pearl said. “That’s an aspect of military culture I stress to students in the program. We also need to support caregivers so they can take care of our military members.

Col. Pearl and Dean Sarah Thompson with Waffle the VA therapy dog at the University of Colorado Gala Tribute to Donors in 2010.

Pearl hopes that veteran interactions with service dogs could be one method to help bridge the gap between themselves and people.

“We’re hoping veterans form better relationships with their dogs and that those relationships extend to people,” Pearl said. “We hope they will feel more grounded and anchored and have that touchstone with the world.”

Pearl's research aims to produce quantitative data on how stress, anxiety and other maladies can be reduced through these relationships. Regardless of the outcome of the study, Pearl emphasized the importance of exploring new ways to care for military personnel and veterans.

“It is imperative that we continue to expand the knowledge base of military and veteran medicine and nursing so we can take care of those who wear the cloth of this country,” Pearl said. “They have sacrificed so much. They deserve so much. We have an obligation as a country to provide the best we can to these people who have been so affected by the wounds of war, whether they are visible or invisible wounds. We have that same obligation to their families who have also sacrificed. It is a way to understand them, support them, celebrate them and to give them a greater sense of community.”