On a tour of CU Anschutz Medical Campus facilities and programs, U.S. Rep. Jason Crow learned how the campus in the heart of his district is expanding mental health resources and innovation. The emphasis is well-timed, considering the need for new treatments and improved patient access has never been greater.

Referencing the recent shooting at the STEM School in Highlands Ranch, the newly-elected congressman said Colorado’s mental health crisis, particularly among youth and adolescents, is one of the “top three issues” voiced by his constituents. Crow said he was told during a recent visit to Children’s Hospital Colorado that the hospital has seen, in just four years, a six-fold increase in psychiatric ward admissions for attempted suicide in the 8 to 18 age group.

“In Colorado, we have a great quality of life, lots of sunshine and a good economy, but we have a tremendous problem with mental health … How do we start getting our arms around it?” Crow asked during the May 28 tour. He represents the 6th Congressional District, which includes all of Aurora and much of the metro-Denver area. 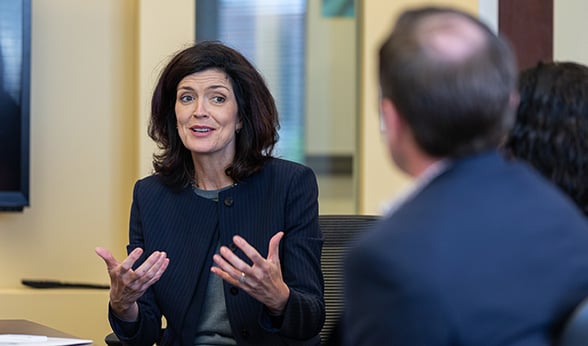 C. Neill Epperson, MD, chair of the School of Medicine’s Department of Psychiatry, and Matt Mishkind, PhD, deputy director of the Helen and Arthur E. Johnson Depression Center (JDC), and Heather Mulvihill, MS, MA, LPC, board chair of the JDC, gave Crow an overview of the campus’s shared vision and growing emphasis on mental health.

Epperson explained the clinical care and research taking place within the schools and colleges, as well as mental health services offered for students, while Mishkind described the community oriented programs and innovations offered through the JDC and the Steven A. Cohen Military Family Clinic.

‘Tip of the iceberg’

Epperson noted that while CU Anschutz is increasing mental health resources, research and care – including lifespan programs in the Department of Psychiatry, new telehealth technologies and integrated-care approaches – “we’re just hitting the tip of the iceberg.”

She said the effort requires teamwork, including the many advances offered at a leading-edge academic medical campus such as CU Anschutz, but also assistance from local, state and federal government as well as philanthropy.

A major problem, Epperson said, are Colorado’s low insurance reimbursement rates to mental health providers, leaving people who can’t afford out-of-pocket costs unable to access needed care. “We need more advocacy for parity,” she said. “We really don’t have networks that are adequate to meet the needs of people in Colorado.”

Mishkind explained the JDC’s many services to the Colorado community, including an evaluation around computer-assisted therapies that allow providers to work with more than one patient at a time. Mulvihill added, “We also work to get upstream of a crisis, so we talk to families, teachers and others about how to manage stress earlier on, and how to help kids before things reach a crisis point.”

In addition to Colorado’s need for better financial incentives to providers, which translate to expanded patient access to care, the group discussed how societal shifts have contributed to the mental health crisis. Today’s schools, for instance, often lack curriculums and extra-curricular activities that help students develop social and emotional intelligence and resiliency skills.

U.S. Rep. Jason Crow explains that Colorado's mental health crisis, particularly among adolescents, is one of the "top three issues" voiced by his constituents.

Crow noted that a current federal program offers 100 qualifying schools a grant of $2 million per year over five years to hire more mental health counselors. “I’d like to do something similar, but do it with the development of a life skills and mental health curriculum where we have somebody there who sees what is happening before (the grant starts) and then five years later, so we see the impact,” he said.

Reilly noted that research into mental health generally requires long observation periods to assess whether, for example, high school students who received life-skills services end up as healthier and more resilient adults. He added that academic medical centers should take the lead in developing reliable and interpretable outcome measures.

At the NMHIC, Vogl explained the many ways the center is developing concepts and programs for real-world implementation. “Everything we do is in support of the community, nonprofits and other groups that are trying to solve mental health problems that they haven’t previously been able to solve,” he said.

NMHIC is on the leading edge of testing new ways and tools, such as virtual-reality devices, to make mental health services more accessible to everyone. As one example, the center is working with Pixar Animation Studios to create social and emotional learning tools for children.

“There is a lot happening,” Epperson said, “so this is a really good time to join with us as we’re investing more resources to enhance mental health in Colorado.”