If successful, this could have major implications for those suffering brain injury, stroke, Parkinson’s disease and other neurological problems. 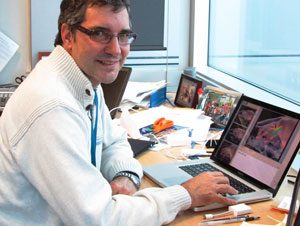 Diego Restrepo, director of the Center for NeuroScience at CU Anschutz.

The team of neuroscientists and engineers will use a special lightweight microscope, which they designed, to peer into and control the living brain of a mouse as they try to reconnect parts of the brain that no longer communicate with each other.

The miniature microscope, using a unique electrowetting lens, is mounted on the head of a mouse and with its high-powered, fiber-optic light can actually view and control neural activity as it happens.

According to Gopinath and Bright, the electrowetting lens is compact, low power and has good optical quality making it ideal for this kind of research. The liquid lens can change shape when voltage is applied.

The team will use an optic fiber to disrupt the signals between the olfactory bulb of a mouse, which receives information on odors, and the olfactory cortex, the part of the brain that allows it to smell. In essence, they will shut down its ability to smell and then try to restore it by activating the olfactory cortex using the miniature microscope.

The mouse will be awake and behaving normally throughout this while the team views and controls what is happening in the brain with the electrowetting fiber-coupled microscope. They can stimulate the animal’s brain activity using powerful laser light that flows through the microscope’s fiber-optic bundle.

“One major problem with the brain is that with certain diseases or injuries, one part of the brain stops talking to another,” said co-investigator Diego Restrepo, professor of cell and developmental biology and director of the Center for NeuroScience at the University of Colorado School of Medicine. “If someone has a stroke they may no longer be able to speak.”

Once connections between brain areas are lost, it is difficult to get them communicating again.

Restrepo said if researchers are successful reestablishing brain connections in a mouse, they may be able do the same in humans with brain injury or disease.

“For example, if there is loss of connection between the retina that detects the image in the eyes and the visual cortex, in the back of the brain the patient has a problem detecting images that in the worst case leads to blindness,” Restrepo said.  “That loss of connection between the retina and visual cortex can be due to neural problems such as stroke, neuro-immune disease or traumatic brain injury.”

If this experiment is successful, he said, this microscope could eventually be modified to activate neurons in the visual cortex based on the visual input. In other words, creating a bridge between two parts of the brain where communication has stopped.

She also noted that two of the principal investigators on the grant are women, a rarity in the field of engineering.

“This particular grant is for high risk, high payoff approaches,” she said. “And this is a very high risk project. We are pushing the technology farther and seeing if we can use these optical tools to ultimately make an impact on humans.”

The grant is funded under a program from the National Science Foundation known as the "Integrative Strategies for Understanding Neural and Cognitive Systems (NSF-NCS).”

It is one element of NSF’s broader effort directed at Understanding the Brain, (http://www.nsf.gov/brain/) a multi-year activity that includes NSF’s participation in the Brain Research through Advancing Innovative Neurotechnologies (BRAIN) Initiative.

The team also won a second NSF grant of $200,000 to be used in the dissemination and commercialization of its microscope.