On May 9, a conference room in the Education 1 building on the University of Colorado Anschutz Medical Campus steadily filled with smoke, ozone, particulate matter and a brew of other pollutants.

Well, not literally. The aforementioned air pollution agents were the focus of an Air Quality & Health Symposium hosted by the Colorado Air Quality Control Commission and the Colorado School of Public Health (ColoradoSPH). A series of speakers presented information about the most significant challenges to Colorado in maintaining safe air quality, including traffic increases, wildfires, accelerating growth and climate change, while the attending commissioners were updated on the latest evidence on air pollution and health.

“There are billions around the world not breathing clean air,” he said.

The symposium occurred in the aftermath of Colorado’s recently concluded legislative session, which saw passage of a number of bills aimed at reducing emissions that dirty the air. These include House Bill 1261, which establishes goals to reduce greenhouse gas emissions in the state at least 26 percent by 2025 and 90 percent by 2050. In addition, Governor Jared Polis in January issued an executive order supporting a “transition” to zero-emission vehicles in the state. 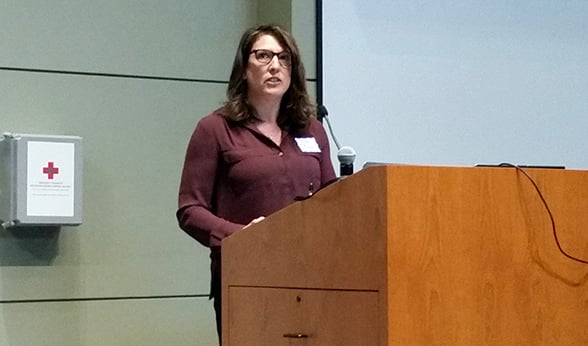 Jill Hunsaker Ryan, executive director of the Colorado Department of Health and Environment, said the transition to zero-emission vehicles in Colorado is "our highest priority."

That transition is “our highest priority,” Jill Hunsaker Ryan, executive director of the Colorado Department of Health and Environment (CDPHE) told the crowd. “Transportation is the single greatest source of climate-changing emissions.”

Transportation is the only one of the big three sources of greenhouse gas emissions – power sources and the built environment round out the trio – that is expected to grow in the coming years, noted Taryn Finnessey, senior climate change specialist with the Colorado Department of Natural Resources.

Changing our sources of power

“We are changing our sources of power, but we are not necessarily changing the ways that we move as rapidly as we should be,” Finnessey said. She added that steps to “clean up our energy grid” by continuing to adopt renewable sources – there are now more than 57,000 clean energy jobs across the state – work hand-in-hand with electrifying transportation. Construction of charging stations for electric vehicles, begun in 2017, is well underway. Nearly three dozen stations, placed roughly every 50 miles along major highway corridors, are slated to be in place by 2020.

Rob McConnell, a professor at the University of Southern California (USC), pointed to the health risks posed by vehicle emissions, particularly to those who live nearby busy roadways. McConnell summarized the findings of USC’s 25-year Children’s Health Study, which followed some 12,000 children living in Southern California.

Researchers used spirometry tests to measure lung function in the participants and established a clear association between abnormally low lung function and living in communities with high particulate levels, McConnell said. The study also showed increased rates of childhood asthma among children who lived within 150 meters of a roadway.

Confronting these sobering statistics should be on the board for Colorado, McConnell said, noting the upcoming widening of I-70. He described steps taken in California to mitigate people’s exposure to pollution near roadways, including expanding mass transit, building high-density housing, and creating parks and other green spaces as buffers.

“By ignoring roadway pollution, we are missing an opportunity to improve air quality,” McConnell said.

Other speakers also noted the health risks posed by polluted air. Dr. Jennifer Peel, a professor of Epidemiology for ColoradoSPH and Colorado State University (CSU), cited data from the Health Effects Institute’s Global 2017 Burden of Disease assessment that pegged the worldwide number of premature deaths tied to fine particulate matter at 3 million. In the United States, the toll was 100,000 lives; in Colorado the number was 650, Peel said.

There is “solid evidence” tying short- and long-term exposure to particles of 2.5 microns (PM2.5) – about one-thirtieth the diameter of a human hair – to cardiovascular and respiratory disease and mortality, Peel said. But evidence is growing that these particles also have adverse effects on the central nervous system, including depression, cognitive decline and autism, she added.

The West Is hotter than ever

Peel cited wildfires as an important source of health-threatening particulate matter. As Finnessey and others noted, fires in Colorado and the West are more frequent and hotter than ever before.

Dr. Jonathan Samet, dean of the Colorado School of Public Health (far left), fields a question from an audience member at the Air Quality & Health Symposium.

“The size and severity of wildfires has increased significantly over the past four decades,” Finnessey said. “And they are projected to continue to increase.” She noted that “science agrees” that without significant changes, the climate is expected to warm 2 to 6 degrees Fahrenheit by 2050. That rise will contribute to ever-thirstier and more heavily stressed ecosystems that are more vulnerable to prolonged drought and more intense wildfires.

And where there is fire there is smoke that can spread across states and regions. Dr. Colleen Reid, assistant professor in the Department of Geography at CU-Boulder, described her studies of the impacts of wildfires on air pollution and health. She said there is “clear evidence” associating wildfire smoke with respiratory health, including exacerbations of COPD and asthma. More studies of the long-term effects of exposure to wildfire smoke and possible public health interventions are needed, Reid added.

An important part of that effort is figuring out what exactly makes up that smoke. That’s the goal of Dr. Emily Fischer, assistant professor in the Department of Atmospheric Science at CSU. Fischer said wildfires often elevate PM2.5 levels on the ground, creating new emission-control challenges.

Fischer led a National Science Foundation project called WE-CAN, which aimed to understand wildfire smoke by going to the source. She and fellow CSU scientists boarded a research airplane in 2018 that flew through “rivers of smoke” produced by western wildfires, with the aim of studying the composition of the thick plumes. Among the questions: how does the composition of smoke change as it ages and how does it contribute to rising levels of ozone, another primary air pollution issue.

The efforts to improve air quality also proceed on the ground. Dr. John Volckens, professor of Environmental and Occupational Health for ColoradoSPH and in CSU’s Department of Mechanical Engineering, described work with his team to develop an Ultrasonic Personal Aerosol Sampler (UPAS) that uses cell phone-assisted technology to measure individuals’ exposures to PM2.5. About 1,000 of the relatively inexpensive units are in operation around the globe, Volckens said.

Even more ambitiously, CSU partnered with NASA on a “citizen-science” initiative called CEAMS (Concerned and Engaged Community Members) that set up a network of air-monitoring stations around Fort Collins. The stations, manned by citizen volunteers, gather real-time air-quality data that supplement satellite imaging and the computer analysis that NASA uses to develop predictive air-pollution models.

The information from the monitoring network produced much useful information, Volckens said. For example, the team noticed elevated particle levels in the Old Town section of Fort Collins on cold winter nights. The reason: on those nights, the residents of the mostly old homes were lighting plenty of wood-burning fires.

“Science presents an opportunity to learn more about behavior and about how behavior and exposures [to air pollution] affect each other,” Volckens said. “I think we are only at the beginning of scratching the surface of that opportunity.”

Cleaner air on the horizon

But Volckens also cautioned that changing behavior is no easy task. And while Colorado now has plenty of initiatives on the table to address air-quality issues and climate change, the hard work of implementation is only beginning, Finnessey said.

“The challenge comes in figuring out what this all means and how do we achieve our goals,” she said.

Samet noted the “huge number of adverse” effects attributed to air pollution and the need for science to continue to generate as much evidence as possible about the risks dirty air poses. But in the end, he said, deciding on what to do with the data lies in policymakers’ unpredictable hands.

“The data still leaves those who make the decisions left to make those decisions,” Samet said.

This story was written by guest contributor Tyler Smith.