Whether it be from a therapeutic machine or the sun’s rays, radiation can be harmful to the skin. After over a decade of research, an interdisciplinary team of physicians and researchers at the University of Colorado Anschutz Medical Campus developed a skin cream that’s formulated to heal skin exposed to radiation.

The team is exploring ways to deepen Difinsa53’s commercial and patient reach, possibly as a Federal Drug Administration-approved product targeted at preventing damage to the DNA of skin cells. Currently the lotion, which as been on the market for about 18 months, is sold over-the-counter as a protectant, moisturizer and healer of skin exposed to radiation.

“This has a potential role in mitigating DNA damage to skin cells from both solar radiation and therapeutic radiation,” said Theresa Pacheco, MD, professor of dermatology, CU School of Medicine (SOM).

The lotion features a healing natural extract from milk thistle, silybin, that is unique to skin therapy creams.

In his pharmacological research, Agarwal, one of the world’s foremost scientists exploring the use of naturally occurring compounds to prevent and control cancer, found that the pure molecule of silybin would inhibit skin cancer in mice. Delivering silybin to human skin proved much more problematic, and the CU team applied for and received a National Institutes of Health tech-transfer grant (one of several grants they received) to allow further study.

During that time – as the team developed a lotion formula that contained sunscreen molecules as well as anti-aging and radiation-therapy protection properties – Harrison was diagnosed with breast cancer and began radiation therapy. She used the cream and found that it helped to resist the effects of radiation as well as heal her skin.

Penetrating the crowded sunscreen market was a tall order, so “we turned our attention to developing a product that would help people who are getting radiation therapy,” said Glode, who, along with Pacheco, Agarwal and Anchordoquy, are all CU Cancer Center investigators. “Also, we were emotionally attached to Gail (she died a few years ago), and that drove us to help patients with skin damage from therapeutic radiation.”

Multiple radiation oncology practices currently recommend Difinsa53 – a reference to skin-healing molecule P-53 – to their patients, while thousands more customers are using the product – available online here – to soothe and hydrate their skin daily. That’s a satisfying accomplishment for a group of scientists who sustained their research through $10 million in grants – NIH, Colorado Advanced Industry Accelerator Grant and angel investors – plus support from friends and family. 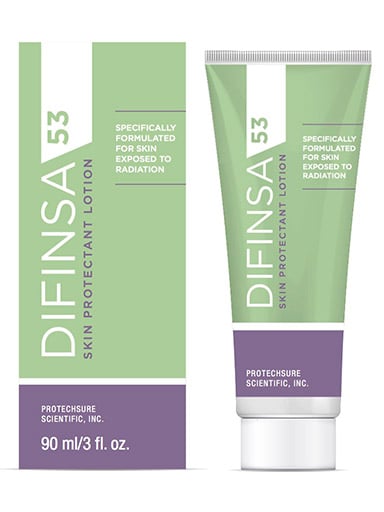 The CU Anschutz-developed Difinsa53 skin lotion is available as an over-the-counter product.

“Getting involved with a start-up and learning about sustaining a company has been a real challenge for the founders because none of us went to business school,” Glode said. “The grants and other contributions are how we’ve gotten as far as we have. So, there’s a story here about a small, bootstrap business that’s had some success.”

“We’ve learned that it’s really tough to penetrate the cosmetic market,” added Pacheco. “Estee Lauder and other large cosmetic companies have expressed interest, but first we want to see how this goes with drug and device pathways.”

Both of those pathways – drug and device (another FDA classification, not necessarily a mechanical device) – would entail FDA approval. If those hurdles are cleared, another potential pathway would open – the cream could be marketed as a way to prevent DNA skin cell damage from UV radiation, Pacheco said.

Patients of skin cancer and other skin diseases are a fast-growing population. Over half of the U.S. population will develop skin cancer sometime in their lifetime, Glode said. So, if benefits from a skin-cancer prevention cream were to replicate the positive results of the sibylin-in-mice studies, “this product could add to the efficacy of approaches that include wearing long sleeves and long pants and using sunscreen,” he said.

Overall, you could say this CU interdisciplinary success story germinated in a milk thistle plant, was nurtured in the labs of a pharmacologist (Agarwal), received formulaic boosts from the expertise of a formulation expert (Anchordoquy) and a dermatologist (Pacheco), kept its wheels turning thanks to a team coordinator (Glode), and had at its heart the memory of colleague and cancer-fighter Harrison.

“Our goal is to get the product to the right patient population – whether it be people suffering from radiation dermatitis, sunburns or other DNA-damaging insults,” Pacheco said. The ultimate goal, she said, is to successfully create and market a disease-preventative product.