Charles Walters doesn’t consider himself a hero, but the moment he enters the University of Colorado School of Dental Medicine the retired Naval Captain and World War II veteran receives a hero’s welcome from the clinicians who will repair his chipped tooth.

Walters is greeted by Heidi Tyrrell, RDH, assistant director and clinical instructor in the dental school’s Heroes Clinic, who cheerfully tells him his care will be free of charge. Tyrrell says it’s a small gesture of gratitude to someone who so honorably served our country.

“The Dean of our School of Dental Medicine, Dr. Denise Kassebaum, insists (on the free care), and I couldn’t agree more,” she says to Walters. “It’s such an extraordinary honor for us to take care of someone like you. The fact that you not only served in World War II but re-upped and served in the Korean War – there are no words to express how much I admire and respect you.”

Charles Walters, a WWII and Korean War veteran, shows his chipped tooth to student provider Olga Hamilton at the Heroes Clinic in the CU School of Dental Medicine.

Walters, a widower who lives on his own, is visibly touched by the news, noting that he gets by on a modest fixed income – Social Security and his Navy retirement. In addition to his wartime service, Walters spent 32 years in the Naval Reserve.

The Southern California native enlisted in the Navy immediately after the bombing of Pearl Harbor and served in the Pacific Theater of WWII. Instead of being dispatched to a Destroyer, which was his hope, Walters was assigned to Naval communications intelligence where he served on a team that deciphered Japanese transmissions. “It was exciting work, breaking the enemy’s coded messages,” he says.

Walters returns the gratitude to the CU clinicians – the Heroes Clinic is staffed by faculty and fourth-year students – and says, “I appreciate what you’re doing – there’s nothing that’s too good for the service people, and I mean that primarily for the people who fought – and still are fighting – in battles.”

‘All dental specialties under one roof’

The Heroes Clinic launched in August 2014 thanks to a $1 million grant from Delta Dental of Colorado. The program originated to provide free dental care to student veterans enrolled at CU Denver and CU Anschutz. They are an underserved population as most veterans do not quality for or receive coverage for dental care when they leave the military. The Heroes Clinic fills this gap by providing dental services which supplement health care provided through the Veteran’s Administration. 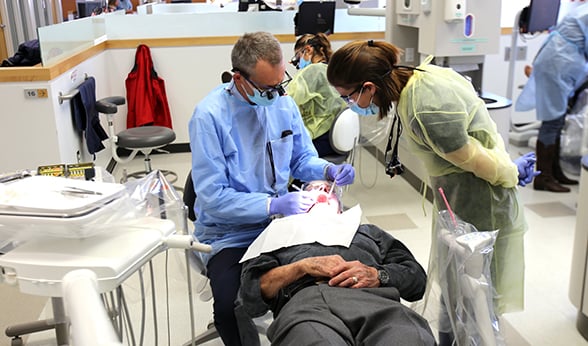 [perfectpullquote align="left" cite="" link="" color="" class="" size=""]"It's the greatest joy to talk to these vets. It's a privilege to help such a deserving population." – Heidi Tyrrell, clinic assistant director[/perfectpullquote]

Now, the Heroes Clinic is looking to expand care to even more veterans, and the dental school has the faculty and students ready to serve. “Our faculty is amazing. We have all the different dental specialties under one roof,” Tyrrell says. “And Delta Dental loves what we’re doing; they love the stories they get every quarter about veterans and what we’ve done for them.”

Since 2015, the Heroes Clinic has served more than 500 veterans, including Walters, who is making his first visit as a Pathway 2 recipient.

Sitting in the next patient chair over, Micah Marmaro, one of the first Heroes Clinic adherents, gets prepped for a tooth crown. Marmaro, who served in the Marines for four years, calls the clinic an “incredible” service. He needed some fillings replaced two years ago, but lacked dental coverage. “I was quoted $5,000 or $6,000 to get the work done, and as a student that’s not easy to pay for,” he says. “It was either have it done or continue to have pain in my teeth. It was a godsend this came along.” 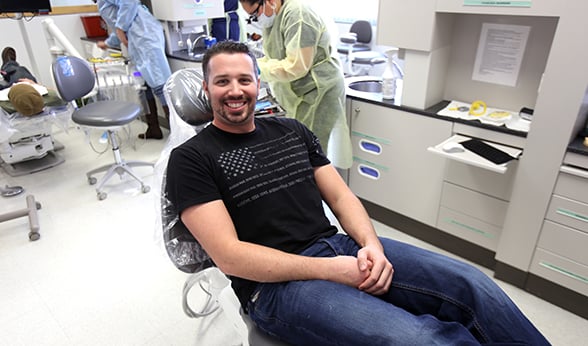 Micah Marmaro is one of the original patients at the Heroes Clinic. He served in the Marines for four years.

He’s been to the Heroes Clinic multiple times since that first visit. “Overall,” Marmaro says, “it’s fantastic to be able to come in and get the level of care you get here.”

Walters happily chats with both providers, while Tyrrell beams at the sight of this 92-year-old enjoying this long-overdue visit to the dental clinic.

“It’s the greatest joy of my job to talk to these vets, and Mr. Walters is so amazing. He’s like a hot fudge sundae with peanuts, caramel and a cherry on top – the whole nine yards,” she says. “The big thing is the extraordinary gift from Delta Dental. It’s such a privilege to help such a deserving population.”